I would like to take this time to thank everyone that has made Killarney’s the #1 Raider bar in SoCal; In California and across the United States. Its amazing all the new patrons that show up for their first time after they have goggled “Raider bar to watch game” and Killarney’s shows up. We have patrons that drive from long distances and some that actually fly in from another state to be with us and our Raider Legends and friends. 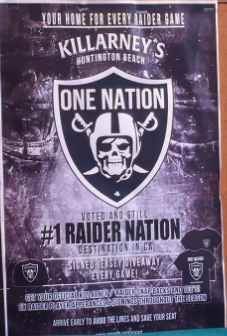